100% reliable! Save up to 70% on your online money transfers from the comfort of your home CHECK OUR LOW RATES
Open
-

Calling from USA to Angola
Use Enjoy Prepaid calling plans for great savings on ALL your international destinations worldwide!

Roaming charges are applied by your phone provider for calling from your cell phone to an access number when outside your country.
You may consult your local access numbers here.

What Angola long distance plan should I choose?

Enjoy Prepaid offers a variety of calling card plans, each created to meet the different needs of different customers. Use the guidelines below to determine which plan best fits your requirements, based on your calling patterns:

How do I buy Angola long distance plans?

Get your calling card from Enjoy Prepaid in only 3 clicks:

In the following minutes, you will receive an e-mail confirmation of the order you've placed.

How do I use my Angola long distance plan?

Once you've received your PIN, you can start using your plan; just follow these simple dialing instructions:

Please make sure you DO NOT PRESS CALL or SEND BUTTON on your phone after you enter the destination number. This is to avoid being charged by your cellular provider for the international call.

Your call will be connected in just a few moments; for an easier dialing process, we recommend you activate PINless dialing and Speed Dial.

With Enjoy Prepaid, you get more than just low rates for your international calls:

What calling features do I have on my Angola long distance plan?

Once you've signed up with Enjoy Prepaid, you can enjoy all of its great functionalities and features:

A small country in the Western tip of Africa, Angola is still one of the world"s best kept secrets. Heaven if you"re into beaches, waterfalls and surfing, but not as attractive for urban explorers who might not find its cities interesting. Start off in the capital city Luanda, with its dilapidated forts, mansions and churches still a sign of the former colonial rule. Portuguese is still a widely spoken language, even though many dialects still survive thanks to Angola"s mixed population. Using Luanda as base, explore the beachy regions of Lobito or Benguela and stay in riverside lodges along the Kwanza and Longa rivers. If you"re into trekking and wildlife, there will be ample opportunity for the safari of your dreams in the Kissama National Park, where you will also be able to spend the night in a lodge. Angola is also home to some of the most magnificent waterfalls in the world, with Kalandula said to be the third biggest waterfall in Africa. Also worth a visit are Binga and Hungueria Falls, although the latter is quite hard to reach.

Not looking for Angola long distance plans? Call back to Angola from these popular destinations:

The Angola long distance plans offered by Enjoy Prepaid are a very convenient and affordable way of making international calls. All plans can be activated for Auto Refill so that you never run out of credit. Also, you can manage your account online, activate PINless dialing, Speed Dial, and many more options to enhance your calling experience.

Need an affordable calling solution for your business or team? Contact us and request an offer of business phone card plans and we'll make you an unbeatable offer. You'll benefit of great call quality and very low rates to international destinations. 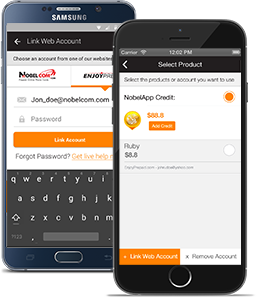 Find out more about NobelApp

With NobelApp Credit you can:

Enjoy Prepaid is a division of NobelOne Inc.